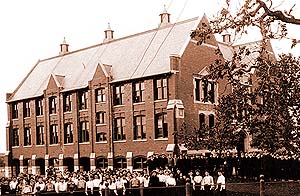 Early days at Victoria College have been described by Frederic G.C. Wood, student in the first class of 1903-04:

"When Victoria College began its classes in the fall of 1903 it was, in most aspects, a part of Victoria High School.  Its first home was the new building at the corner of Fort Street and Fernwood Road into which the high school had moved the previous year from its very crowded quarters in the ancient four-room brick structure squeezed in between the Girls Central and Boys Central Schools at the nearby corner of Yates and School Streets."

"The principal's office, with a large table, around which the seven members of the class sat, was used when the adjoining classroom was needed for high school purposes...There was no library except for a few general reference books kept in the teachers' lunchroom on the second floor.  There were no study periods as the timetable kept us busy from nine to three, five days each week.  There were no special lectures and, of course, no sports.  Although the new high school building had a good-sized auditorium on its second floor, no social events were permitted for either school or college students."

Quote from A Multitude of the Wise: UVic Remembered, p. 31, by Peter L. Smith